United Aluminum is proud to be celebrating a centenary of excellence in Rolling Aluminum. As we look back over our century of success, we look to the future and to continued success and innovation based on our firm principles and commitment to excellence and quality.

How it all Began…

Our journey to excellence started as a scrap dealership on Rose Street, New Haven CT. The company is incorporated as United Smelting and Aluminum (USA) United Smelting and Aluminum becomes the largest secondary smelter in the United States during WWI.

We wrote these words, and remain true to this philosophy:

“Ship on time; ship the quality of goods agreed upon; make every transaction merit a repeat order. This is the spirit that pervades our organization. Whether you order a pound or a carload, you are entitled to service, the quickest possible shipment and above all – United Quality”

The rolling operation proved so successful, that the scrap and secondary smelting operations were spun off into a separate company called Hamden Smelting Company (Later Hamden Steel and Aluminum)

Rolling continues to expand at the New Haven location. 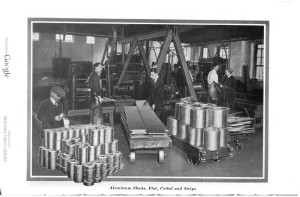 Bob Lapides, grandson of Harris, returns from the US Navy and installs the first Sendzimir mill for rolling aluminum to meet the close gauge tolerances required by the radio condenser market and other high quality markets. The company closes down casting and hot rolling operations to focus on cold rolling.

The company moves to a new facility in North Haven CT, and is renamed United Aluminum Corporation (UAC). More expansions and capabilities are added. Innovation is key to the success of United Aluminum.